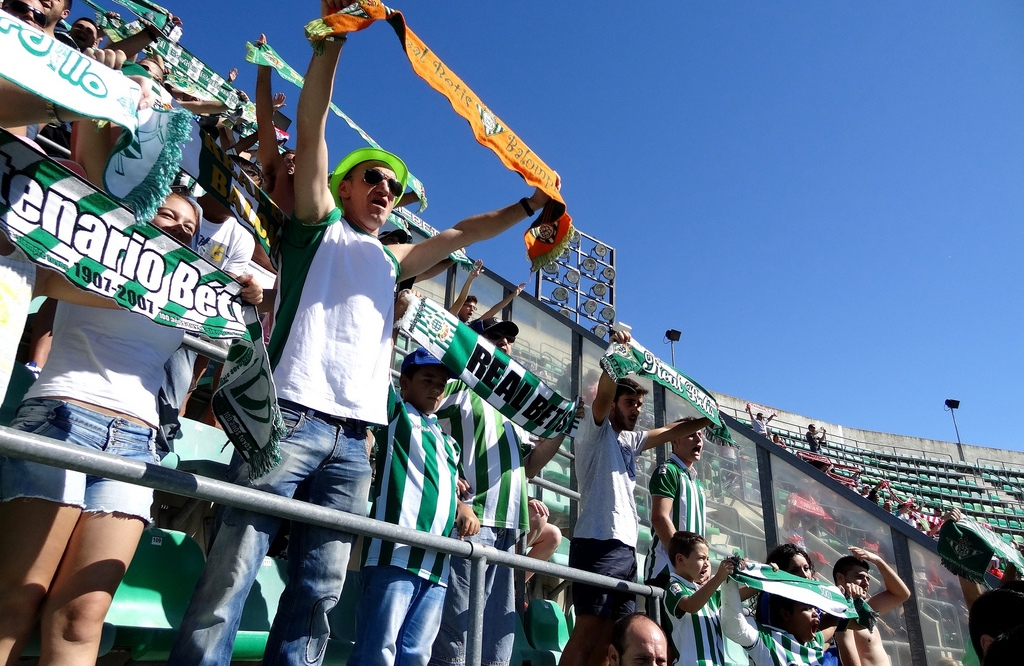 The Santiago Bernabéu is a daunting place to visit. Zinedine Zidane’s all-conquering Real Madrid are the first side in UEFA Champions League history to retain the famous trophy and are also reigning La Liga champions. Therefore, when Real Betis left Andalusia for the Spanish capital on Wednesday 20 September 2017, they knew they had their hands full. Real Madrid had knocked three past Real Sociedad at the Anoeta Stadium the previous Sunday. In doing so, they equalled Santos’ 50-year record of scoring in 73 consecutive matches across six different competitions. They had the Los Verdiblancos in their sights to surpass the historical feat. Quique Setién and his determined Real Betis Balompié side however, had other ideas.

They defended their ground patiently throughout the match, yet when the ball broke, they had enough about them to counter fervently. True, they rode their luck as Real Madrid posted 22 shots at goal and dominated possession. Yet, any side would need to against Cristiano Ronaldo and co. Sometimes you have to applaud a defensively brave, counter-attacking performance. This was certainly one of them moments.

Antonio Adan played a blinder in goal as he brilliantly denied Ronaldo, Kroos, Modric, Ronaldo again, and lastly, Gareth Bale as he attempted an audacious flick at the near post which seemed destined to be played over and over, for years to come. Instead, it was Adan – the former Real Madrid goalkeeper – who savoured the moment.

As Real Madrid attacked, throwing players forward in true gung-ho style looking for the goal which would make history, and more importantly give them three crucial points in La Liga, the ball broke. Former Barcelona man, Cristian Tello, countered down the left, waited patiently before playing the ball across the Real Madrid half towards Antonio Barragán. He looked up, swung a curling ball in over the head of Sergio Ramos, who looked on helplessly, onto the head of on-loan Paraguayan forward, Antonio Sanabria. It all seemed to be playing out in slow motion as the ball was headed downwards by Sanbria past Keylor Navas. 94 minutes was on the clock; Real Betis had just scored. The Bernabéu fell quiet. Quique Setién and his team celebrated in raptures on the touchline. They’d done it. They’d just beaten Real Madrid on their own patch.

This was an ultimate high in Real Betis’ recent history. Although, as their fans know too well, highs for Betis are normally followed by lows – and bad ones at that. They have record for it and their history is filled with such moments. Yet, their fans wouldn’t have allowed for such moments to be dampened by such thinking. This win was to be rightly relished.

Football is known to have hit Andalusia for the first time towards the end of the 19th century. It is thought British expats brought the game over with them when they came to work in Seville’s expanding manufacturing industry. The club, originally founded by students in 1907 as Seville Balompié, took time to find their spot within the game. The students chose Balompié as they wanted to avoid the anglicised name of ‘football’ or fútbol, as embraced by local rivals Seville FC.

The club enjoyed early success. They won the Copa del Andalusia in 1910, ’11, ’12 and again in 1915. In 1909, however, a third team was born in the city of Seville; Betis FC. Due to intense competition and financial issues, their stint within the game wouldn’t last past 1913. Yet, their mark on football would be prolonged as they resurrected and merged with Seville Balompié in 1914. Not long after both clubs merged, the ‘Seville’ was dropped as they took up ‘Betis’, therefore becoming Betis Balompié. The ‘Betis’ was procured from the Guadalquivir river that flows through Seville into the Atlanti, and in ancient times, the Romans knew the river by the name ‘Betis’. Royal patronage was then sought by the club and granted by King Alfonso VIII.  Finally, we had Real Betis Balompié as we know them by today.

Despite initially playing in the blue and white stripes, they switched to the renowned green and white around 1920. This was in no small thanks to Glasgow Celtic who donated their famous green and white hooped kit. To make it their own, club owners, including Betis co-founder Manuel Ramos Asensio, decided to change the hoops to stripes.

Having joined La Primera in preparation for the 1932/33 season, it wasn’t long before Real Betis Balompié left their mark on the Spanish domestic scene. In 1934/35, under the guidance of Irishman, Patrick O’Connell, and with 13 goals from Basque-born Victor Unamuno, Real Betis pipped Real Madrid to the title on the final day.

O’Connell is a curious figure in footballing history. Well-attributed as Barcelona’s saviour from bankruptcy, his playing career took him from Belfast Celtic to Manchester United, via the First World War. During his time on M16, O’Connell captained Manchester United, yet his stint is shrouded in mystery. With United needing a win to stay up on the final day in 1915, they came up against a Liverpool side comfortably placed in mid-table. The match finished 2-0 to Manchester United as they stayed in the old First Division, and that should have been that. After the game however, bookmakers reported an unusually large amount of money had been placed on the 2-0 result at 7/1 in favour of the Red Devils. Seven players were later found guilty by the Football Association of fixing the match (three United and four Liverpool), but O’Connell wasn’t one of them. Despite curiously missing a penalty, so badly wide that play didn’t resume for several minutes as match officials deliberated whether he should be made to retake it, he was deemed innocent of any wrongdoing. O’Connell, despite indications suggesting otherwise, got away lightly.

His success at Betis came at the end of a three season stint as manager. Barcelona came calling and he swapped Andalusia for Catalonia. His La Liga triumph – still Betis’ only one to date – lives long in the memories of Los Verdiblancos fans, despite the O’Connnell name being more associated with Barça than Betis.

Betis from then onwards became the yo-yo team as they switched regularly between the La Primera and La Segunda – and the La Tercera, even. Consistency became an issue, as did financial issues, on many an occasion. This was until 1977, as they triumphed in the Copa del Rey at the Vicente Calderón, beating Athletic Club de Bilbao on penalties following a 2-2 draw. Yet, once again, they found themselves back in the La Segunda the following season as they were relegated.

Despite a 10-year stint in La Primera towards the end of the 1980s, yet more turbulence awaited them in the 1990s. They found their finances under scrutiny, and they teetered closely to yet another relegation, which could have tipped them over the edge towards bankruptcy. Cue Manuel Ruiz de Lopera to mark an infamous start in Real Betis’ history.

Taking over, and thereby securing the club’s future, fortunes took a turn for the better. They managed a third and fourth placed La Liga finish under the guidance of Lorenzo Serra Ferrer in 1994/95 and 1996/97. Yet the latter season was tainted by a harsh Copa del Rey final defeat against Barcelona thanks to a 115th minute extra-time goal by Luis Figo.

Manuel Ruiz de Lopera started making a right name for Betis towards the end of the 1990s as their mercurial behaviour came to the fore. In 1998, following a decent showing in a Brazil side which reached the World Cup final only to be defeated by home favourites France, Betis splashed an audacious world-record £21.5m sum on Denilson from Santos. Things never worked out however, as Denilson flopped and found fitness issues constantly rising, Serra Ferrer departed the club in 2000. Soon afterwards, Real Betis once again found themselves gracing La Segunda – but not for long as they soon got themselves back up the yo-yo string and into La Liga.

In 2004/05, the constant highs and lows of the previous two decades were forgotten as Real Betis beat Osasuna in the Copa del Rey final. The triumphant team included former AC Milan striker, Ricardo Oliviera, a younger Joaquin on the wing, Marcos Assuncao as the chief string-puller and Denilson, although only good enough to be on the bench by that time. Nevertheless, it was Dani Martin who found himself the hero as he came off the bench to score the winner in extra time, after Australian cult-figure, Jon Aloisi, had equalised for Osasuna in the 82nd minute.

The following season they became the first Andalusian side to turn out in the UEFA Champions League, where they faced Liverpool, Anderlecht and managed to beat José Mourinho’s Chelsea thanks to another winner by Dani. However, their appearance on the big stage was short-lived and quickly followed, unsurprisingly, by another low.

In 2006, Manuel Ruiz de Lopera was found guilty of financial irregularities by Spain’s tax authorities. During his time at the helm of Betis, he is alleged to have taken €36 million from the club. He is known to have contracted Betis’ employees and services to his own personal companies and properties, for huge fees. A couple more stints in the La Segunda propped up in the following decade, although much of this will have felt like a long time ago when Antonio Sanabria scored that precise late header against Real Madrid.

The Real Betis Balompié side that triumphed at Santiago Bernabéu had come a long way from their humble beginnings as Seville Balompié in 1907. Made up of the young, old and the unwanted, the side contained the young on-loan scorer Sanabria, well-travelled Mexican, Andrés Guardado, former Manchester City and Zenit anchor-man, Javi Garcia, former Liverpool and Middlesborough full-back, Antonio Barragán, and veteran Betis idol, Joaquin – at the grand-old age of 36. Yet despite experiencing such ecstasy as the ball bounced past Keylor Navas, the Betis fans will know complacency can hardly be be afforded.

As for the Los Verdiblancos, history shows that a high is so often followed by a low.