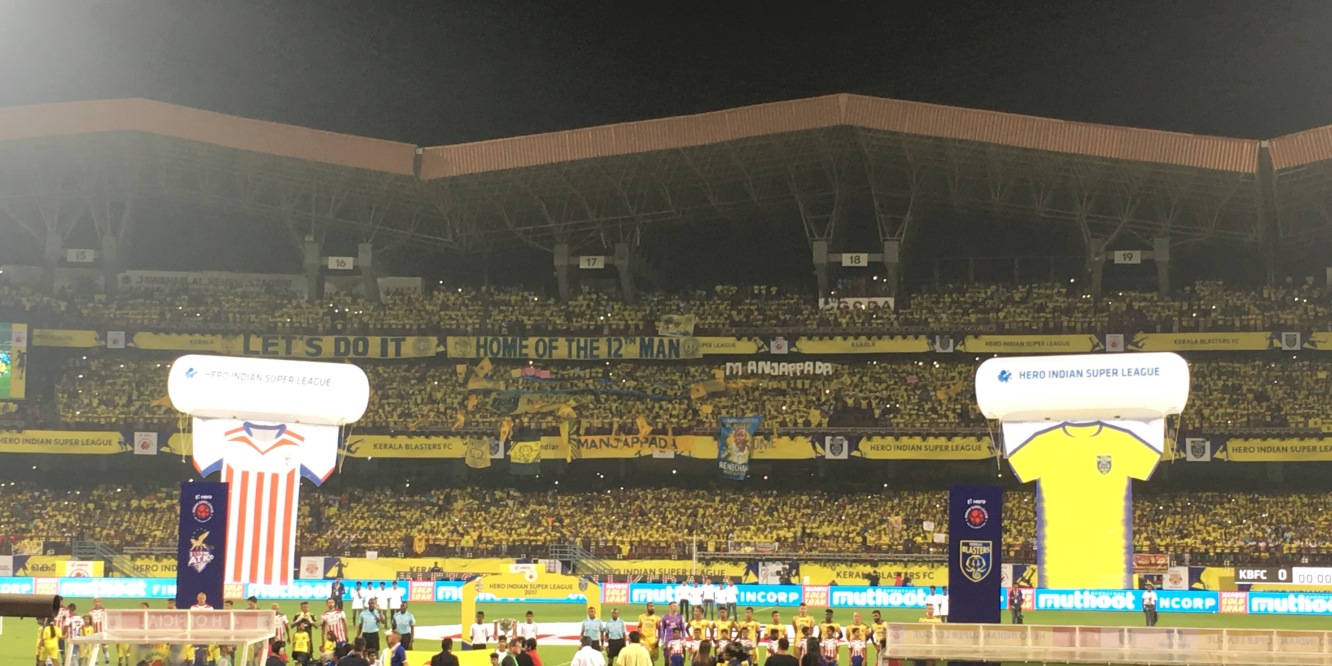 I have been living in India for about two weeks now, and thought I should write a little update about the footballing experience so far.

It turns out the owner of the academy I am working for knows people in high places and wangled me free tickets for the Indian Super League opener between Kolkata and Kerala. Prior to this I had a few days wandering the city and what hit me the most was how hot it was (an average of 30 degrees), and I couldn’t help thinking that football here would be a tough nut to crack.

The game itself, matched my predictions, the pace was incredibly slow and both teams tried to counter attack, making it quite a dull spectacle. What did hit me though was the support, 40,000 Indians were crammed into the stadium and the noise was sensational, a match to any Premier League atmosphere, and clearly much of the population is behind the sport.

But first of all, here’s a little background of how I came to coach in India.. I studied sport science at Durham university, whilst at uni I started coaching my college girls team and undertook my FA level 2, whilst at uni I also spent 6 weeks working with a division 1 side in Ghana’s Volta region called Dynamo F.C.

I then went on to do a sport science masters with most of my study based around football, following graduating from here I worked for nine months as a player scout for the London based Football Radar. During this time I became quite disillusioned with London life and decided I needed a change, so I moved to Chengdu, China and worked as a primary school football coach for 16 months.

At the end of this time I decided I wanted to continue up the coaching pathway and saw my immediate future in Asia. I found it nigh on impossible to get onto a UEFA B course in England, so decided to get my level 2 transferred to the Australian FA and do my AFC B instead. Which brings me to India! I started last week and will be coaching an academy side in the I-league, which I believe is India’s premier competition for juniors.

Originally I signed up for a 6 month coaching contract with the academy U13’s and U15’s, however, as with many foreign coaching jobs, all was not what it seemed. My first meeting with the academy owner was relaxed in nature, but in reality, there was an awful lot to do. He outlined my three main goals;

These are all clearly quite large tasks and I decided to start with the first.

The residential academy is made up of 12 U13 players and 12 U15 players, I was told they train five days a week, which to me, seems too much for players of this age and have voiced my opinion, only to be told that it’s better to plan for five anyway. I was to plan 6 cycles of 6 weeks, and hopefully make it progressive and measurable. I was told the previous Technical Director titled each cycle;

My first thought, on the back of my FFA B licence was that this is a nonsensical way to structure the cycles. Football is a game where all four main moments can happen within a minute, and to focus 18 weeks purely on BP seemed unrealistic with the modern game. As well as this when you are coaching transition, surely you can coach attacking and defending at the same time, as when one team loses the ball one team regains it.

I was also instructed to include football specific conditioning sessions once a week, as well as “game training,” with the remaining sessions being technical sessions. This more or less created the bones of my first cycle. I was told to prioritise attacking football, so more BP sessions would be needed during the early cycles with a more even split towards the end. I decided that instead of creating a second syllabus for the non-residential academies who only train twice a week, I could lift the most effective drills from the technical sessions in each week to create a mixed session that would relate to a game training session.

Now that I had planned which main moments would be trained during each session it was a question of filling in each session title. I had decided that ideally in each week the game training would directly relate to the sessions trained during the week to give added context to each session. Having used the FFA approach to plan the cycles I turned to my FA level 2 teachings to look for some topics and themes for each individual coaching session.

So the above is a sample cycle of cycle one, which is effectively a mish-mash of the FA’s coaching and also the FFA’s coaching. If the boys are genuinely training every day, having a mixture of sessions is important in order to avoid inertia, I imagine that if every session started with a passing pattern, although the pattern would get drilled, it would also become stale and less enjoyable as opposed to seeing how topics like Support relate directly to a session with the objective “getting a defender into the middle third.”

Now that all the planning was done (or at least started) I started putting together coaching sessions for each topic, during Technical Sessions I would follow the Warm Up → Technical Practice → Skill Practice→ Small Sided Game approach that the FA preach and then during the Game Training Sessions I would follow the Passing Practice → Positioning Game → Game Training → Training Game which the FFA promote. Having told there were 12 kids in each group this is what I have planned for, although I am sure this is subject to change and most drills can easily be adapted to add a few extra players, and in the Game Training aspect sometimes players will need to be borrowed from other age groups as 12 is a little light for some Game Training. 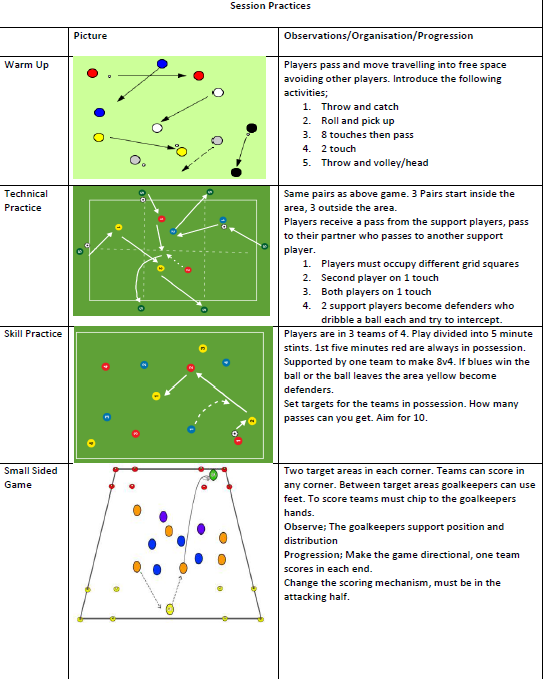 Having coached the support session, I can confirm it more less ran an absolute dream, the players picked up on everything pretty quickly, if anything it was slightly too easy for them, I clearly had underestimated how good these players are. They all have incredibly good technique, and are all excellent passers and receivers, I have noticed that they aren’t great under pressure or in transition, but the core skills are all there which makes my job as a coach, more enjoyable in my eyes, less time teaching how to pass a ball and more time implementing my style of football on them. 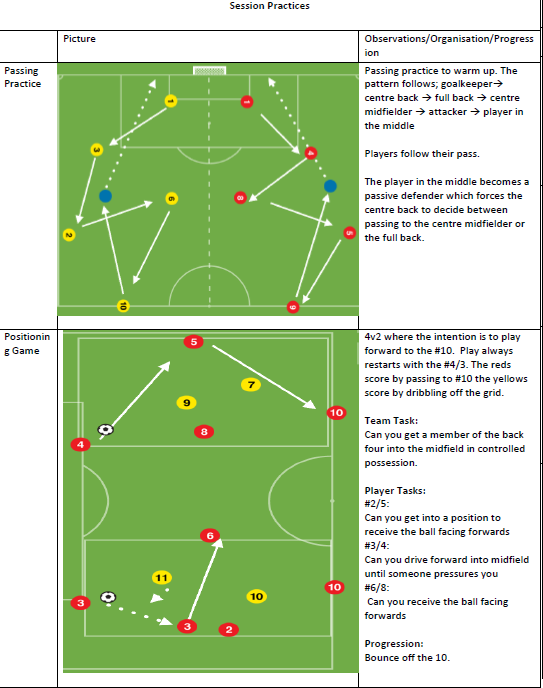 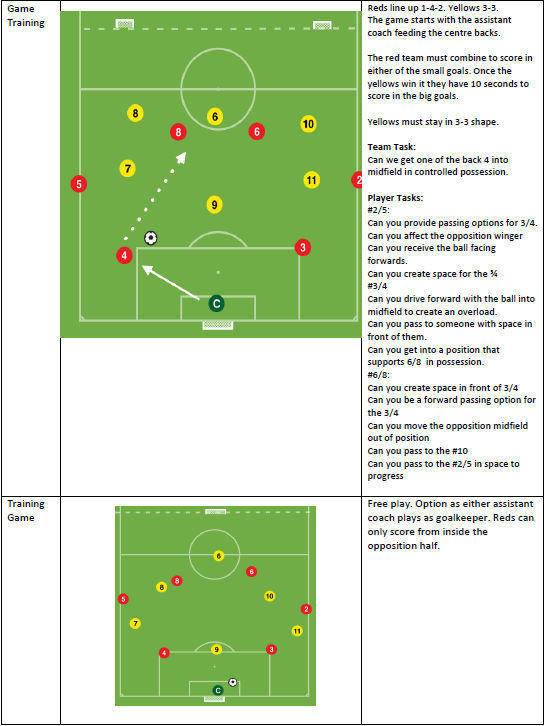 One major drawback is the facilities, honestly, they are shocking, I wasn’t expecting much, but some grass, pitching markings and goals were the bare minimum for me. Unfortunately, we don’t have the luxury of any of these, and ground share with a cricket pitch which is effectively a sand pit. I’ve been told we are looking elsewhere for places to train, and I hope something does turn up. In order to pass my AFC B licence, I need to submit a video session and I don’t think the FFA would be happy with my current situation! 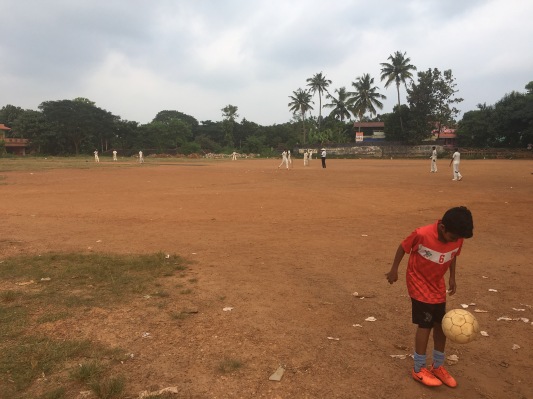 I have no experience as a technical director and this was all very new to me, and the most frustrating thing I have found, is not knowing if what I have been doing is even right! I had friends from the FFA course send me their coaching cycles and I do feel as if I am on the right track, but any extra feedback would be much appreciated.