If there is one thing that has come to characterise the Spanish National Team’s play over the last decade or so, it is ‘Style’. Winning may be important but doing it with panache and a style that’s easy on the eyes can elevate sport to a different level altogether. At Real Madrid, winning in an emphatic manner or with style so to speak is of prime importance. Over the years, legendary players and coaches who couldn’t fit into this spectacular brand of football at Real have been shown the door (Fabio Capello and Claude Makelele are prime examples). Yet for all the emphasis placed on style, there is a certain bandy-legged bearded beauty (Yes, Isco) who couldn’t be a more perfect fit for this lofty ideal; and at the same time looks out of place at Real Madrid.

Isco’s performances and fortunes at Real throughout his time at the club have been stop-start. There always seems to be an aura about him that suggests he could go on to become one of the legends of the game. Creative attacking midfielders however, require a certain freedom, continuity and a well-defined role in order to express themselves fully. For some reason though, this role seems to constantly elude Isco, at least on a consistent basis.

During the second half of the 2016-17 season, Isco played a starring role in helping Real retain the UEFA Champions League and win the league as well. He further asserted his rising star status at the club with stellar performances against Barcelona and Manchester United to help Real win the Spanish and UEFA Super Cups. The stage finally seemed set for the midfield maestro to stake his place among the world’s elite in club football. And yet…

To put all of this into further perspective, his fortunes with the national team couldn’t be more contrasting to those of his club. Under Julen Lopetegui, Isco has been nothing short of spectacular and has been one of the prime catalysts in the national team’s renaissance. So what’s up with him?

The Season So Far

Unfortunately for Real and more so for Isco, the first half of the season turned out to be one of Real’s worst in quite some time. It is quite interesting to note that this terrible run had come on the back of the team’s best season in the Champions League era. Whatever the reason for Real’s lacklustre showing in the first half be it the poor finishing of the forwards, a poor transition defence, an over reliance on crosses or general complacency; Isco’s stock certainly took a hit. While he may have been one of the team’s standout performers in the first 3 to 4 months along with Varane and Nacho, Real’s general gameplay looked stagnant and devoid of inspiration. In spite of the team’s poor form, the general consensus was that Isco was playing well on an individual level and his performances for Spain in the world cup qualifiers were terrific. Then came the match against Sevilla…

Zidane decided to rest Isco for this game and out of the blue, Los Blancos put in an imperious performance against the Andalusians and shipped 5 goals past them. Sevilla might have been in poor form at the time but the speed, incisiveness and direct nature of Real’s attack stood out. In particular, Asensio and Lucas Vazquez had a great game. It was around this time that a strong case started building up against Isco that he slows down play and doesn’t release the ball quick enough. Although such things have been pointed out about his style of play before, the evidence in favour of these aspects of his play suddenly seemed very strong.

To be fair to Isco, it wasn’t as if he was directly responsible for Real’s poor play. Even though Isco may not be lightning quick and his decision making in the final third can sometimes be sub-optimal; his general qualities are extremely favourable to the flow of the game. That said, his performances started fading and soon enough, he found himself on the bench. Despite this, it came as quite a surprise to many when he was benched for the El Clasico against Barcelona. Even though Real played well in the first half, they were convincingly beaten 3-0. It must be noted here that his absence here made no difference to the team’s gameplay. Soon after the turn of the year though, Real’s performances gradually picked up and they even managed to convincingly beat PSG in the Champions League against all odds.

As strange as Real’s disastrous first half was, their uptake in form in 2018 has been even stranger. Among the hall marks of this resurgence have been the dominant play of Asensio and Vazquez, Gareth Bale’s return from injury and Benzema & Ronaldo’s stunning return to form. Their play has been very clinical and direct. Put this in contrast to Isco and everything seems stacked against the midfielder.

In order to present a complete picture, however, his role within Zidane’s system must be examined more carefully.

What Zidane has done for the team in his tenure so far has been nothing short of brilliant. No one expected him to be anything more than a short term interim appointment. It is then safe to say that he has blown everyone’s expectations away. In particular, his exemplary man management skills and ability to motivate players for the big occasion in the Champions League have stood out.

In the midst of all this, there is the curious case of Isco. Initially not a regular under Zidane, he won his place in the side on the back of some superb showings in La Liga. Many have often said that Isco possesses qualities similar to that of Zizou. In fact, Zidane has himself admitted this on a number of occasions. He has even gone on to state his admiration for the Spanish midfielder several times in the media. This mutual trust and relationship between the two has largely held true and it is quite likely that Zidane’s belief in Isco eventually translated to his great performances on the pitch. So what’s gone wrong or ‘appeared’ to have gone wrong for him?

During Real Madrid’s unprecedented defence of their Champions League title, Zidane had innovated his own version of the ‘Diamond’ formation. This would involve Isco at the tip of the diamond just behind Ronaldo and Benzema while Modric, Kroos and Casemiro would form the remaining part of the diamond. In essence, Isco would roam all over the pitch creating positional overloads in different parts of the pitch, thus outnumbering the opposition at all times. At times, he would drop deep to act as a passing outlet when the defence was under pressure. Most importantly though, in the attacking third, his extra presence in midfield and in the forward line made him impossible to pick up. Therefore, the opposition never had a reference point and had a hard time marking Real’s attacking players. What made this system work so well though, was the fact that the defensive coverage for Isco’s roaming role was extremely good. As a result, whenever the opposition counter attacked Real Madrid, his presence in different parts of the pitch didn’t confuse the other players.

This season however has been a totally different story. Many teams in La Liga and even Tottenham Hotspurs in the Champions League seem to have done their homework on Zidane and his use of the diamond. A strategy that has often been employed by La Liga teams this season has been to sit back deep in their own half and absorb all the attacks from Real’s more possession based play with Isco. Due to this, Real Madrid often resorted to hitting in crosses (often of poor quality) to try and break down the opposition defence. Following this, the opposition would then slice open Real with a few vertical passes due to the lack of defensive and positional coverage for Isco’s unpredictable movements.

Zidane finally seems to have understood this and has switched to a more conventional 4-4-2 with the use of 2 wide midfielders that often seem to be either Asensio and Vazquez. This move has largely proved to be successful and Isco seems to have been relegated to the bench once again.

Spain plays a different style from that of Real Madrid. It has often been stated that Isco’s playing style is more compatible to that of FC Barcelona’s due to his more possession oriented game. Although Spain’s playing style has evolved and become a bit more direct under Lopetegui, it has largely remained true to its World Cup winning roots. Under Lopetegui, Isco often plays upfront as a part of a 3-man forward line. Most notably though, Spain doesn’t currently play with true forwards. Although the likes of Iago Aspas, Alvaro Morata and Diego Costa are regularly part of the national set-up, only one of them is usually employed in a game. On other occasions though, none of them starts for La Furia Roja.

Strangely enough, Lopetegui uses Isco in a very similar role to his diamond at Real Madrid. He roams all over the pitch, creates positional overloads and helps Spain dominate possession. In a stark contrast to his general performances with Real this season, his play with Spain is always full of confidence and swagger. His goal creation rate of one in every 327 minutes with Real doesn’t make for great reading when compared to a goal every 75 minutes with Spain.

It might seem puzzling to the unacquainted but the difference between these two versions of Isco is not hard to understand on closer analysis. Lopetegui’s emphasis on using several supremely talented passers in midfield along with another 2 midfielders in the front-line makes it very hard for the opposition to mark these players. All these players keep roaming in midfield and are extremely good at interchanging positions. This style of play has been imbibed in these players through all the age group national teams in Spain. Hence, it is not difficult to see how Isco could confidently nutmeg Marco Veratti or score a hat-trick against Argentina.

The Low-Down and the Future

Upon completely viewing the whole picture, it is hard to fault either Zidane or Isco for this situation. As Zidane rightly points out, he greatly admires the midfielder’s abilities but at the same time he can only pick 11 players out of a 25-man squad. Also, despite a stop start 2018, Isco did have a fantastic game against PSG where he helped Real dominate possession against the deadly front-line of Neymar, Cavani and Mbappe. At the same time, it might be time for Zidane to come up with another in-genius way of bringing out Isco’s best qualities to help Real win games. His other use of Isco as a pressing machine clearly isn’t helping his confidence. 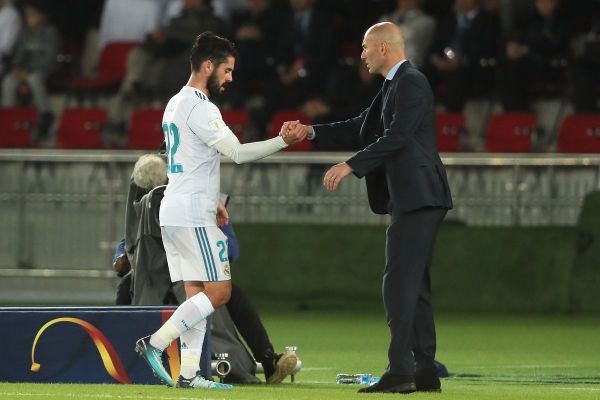 Isco currently has many suitors including the likes of Chelsea, Manchester City and Manchester United. Coincidentally, 2018 also happens to be a World Cup year and Lopetegui sees Isco as integral to Spain’s chances of winning the title. While Isco and Zidane have both hinted that they would remain at Real Madrid, rumours have been circling around of a squad overhaul at Real. Whatever happens, it sure promises to be an interesting summer for Isco and company.

View all posts by Rohan Kaushik