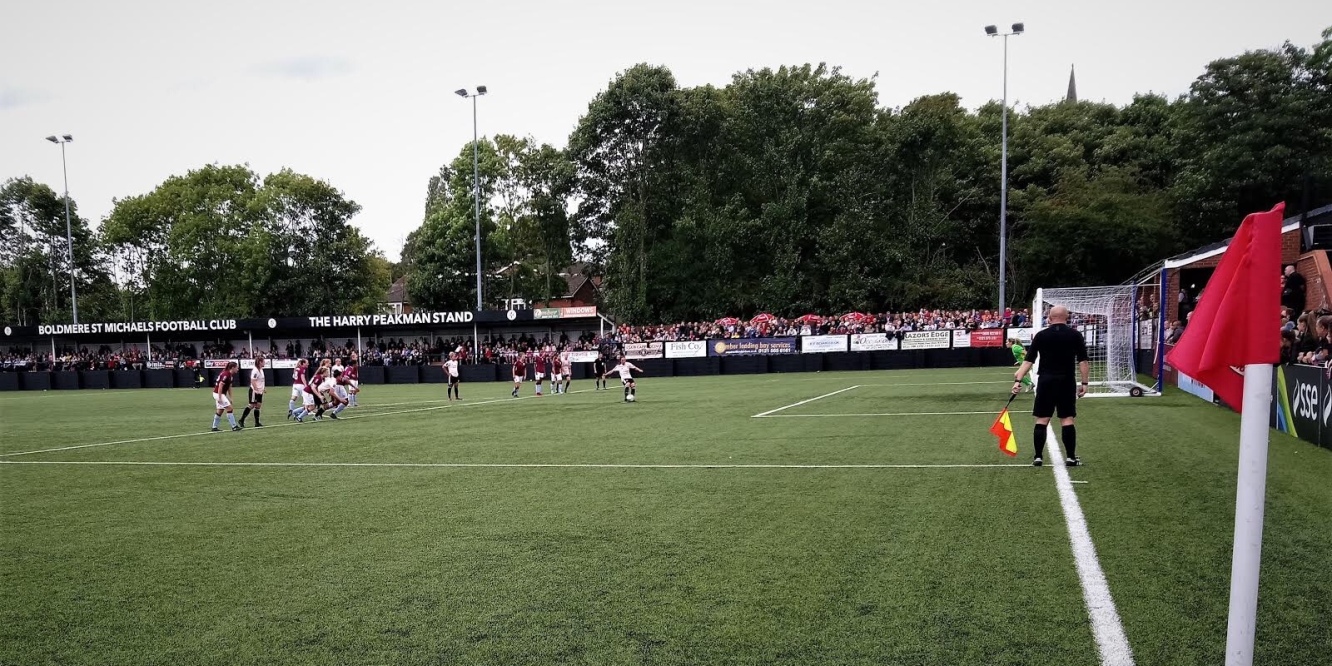 Women’s football is entering a new era in England. The league system has changed to three divisions: The FA Women’s Super League, The FA Women’s Championship and The FA Women’s National League – which is split into northern and southern sections. The FAWSL is a fully professional league, while the FAWC is made up of mostly semi-professional teams. Those that can’t meet the criteria of either league make up the FAWNL… and that caused quite a stir over the summer.

Many well-established clubs in women’s football have been forced to drop divisions due to their inability to meet new licence criteria in the leagues they were participating in. Sunderland Ladies and Doncaster Rovers Belles were the biggest names to suffer relegation as they couldn’t afford to stay in the FAWSL and FAWC respectively.

Sunderland had a track record for bringing through several players who went on to star for the England national team. However, they couldn’t meet the required pro or semi-pro standard after their parent men’s club cut ties with them. Meanwhile, Doncaster had actually won the Women’s Championship – previously known as Women’s Super League 2 – last season. They will now play in the National League (alongside Sunderland) with all of their players moving to other clubs.

On the flip side, one of the winners from the revamp is Manchester United. They’ve been given a second-tier licence and will field a women’s team for the first time in 13 years. Coached by former England defender Casey Stoney, they’ve amassed a host of international players and top, young prospects. I travelled to Aston Villa Ladies to see how they’d get on in their debut league game.

Heading to Boldmere, a residential area on the fringes of Sutton Coldfield, none of my wildest thoughts could come close to what I was about to witness. And why would they? Who in their right mind goes to a ground thinking 12 goals will be scored? And by a single team, as well?

This was the first time I’d seen a game with a double-figure goal tally. The closest I’d come was nine when Gateshead beat Wrexham 7-2 at the Racecourse Ground back in 2011. That was a battering. This was a mauling.

The most ironic thing is, it actually started very brightly for Villa. The first 10 minutes featured a lot of home possession and some great tackles to win the ball back from United. However, for all their positive play, Villa couldn’t get it right in the final third and United soon found their rhythm.

Lauren James, at just 16 years of age, showed so much ability in midfield, running at the Villa backline and causing problems with her exquisite passes out wide. She opened the scoring with a deflected shot and then doubled United’s lead after striking the ball superbly from outside the box.

Aston Villa already looked doomed before a flurry of goals killed off the match unequivocally. Jess Sigsworth – top goal scorer in the WSL2 last season and one of the Doncaster players who left during the summer – bagged a hat-trick in 10 minutes, while Katie Zelem also scored from the penalty spot. The half-time whistle blew and the away side led 6-0. Mental.

If Villa thought the worst was behind them, then they were severely mistaken. United actually matched their first half scoreline with 70 minutes on the clock. Sigsworth grabbed another two and the phenomenal Kirsty Hanson was rewarded for her amazing performance on the wing with a brace herself. Substitutes Mollie Green and Ella Toone showed how United’s bench is equally as dangerous with a goal apiece, before several more chances were spurned late on.

I genuinely lost count of the score at the end, as did those around me – one person thought they’d won 14-0! Honestly, it could so easily have been that much worse. Sian Rogers in the Villa goal was actually in good form and stopped a number of efforts throughout the game. She was mostly let down by a defence who couldn’t handle United’s excellent movement. As soon as they were in behind, their finishing was of the highest quality. Unfortunate for the keeper, who looked visibly upset at her side’s capitulation.

I’ve seen fans turn on a team within an instant of a goal being scored against them. So I must say, it was so refreshing to see – but mostly hear – Villa supporters rallying their side throughout the whole game.

The pocket of claret and blue in the corner of the ground were armed with a flag, a drum and an array of uplifting songs that never ceased after any goal. Each player had their own unique tune but the most frequent number they put out was the most warming. It went: “we don’t care what the score, we’ll love you evermore.”

One fan even sang this at club captain Kerri Welsh long after the final whistle had gone. A great effort from them fans; absolute true ultras.

The positivity of the Villa fans contrasted greatly to the poor attitude from some Man United followers. Their away pocket gave the “you’re getting sacked in the morning” to Villa’s Gemma Davies, a head coach who is 26-years-old and in her first league outing at the helm of any major team. Then they sang about which fans amongst themselves hated Villa more, asked the home side what the score was, mocked the use of their drum and asked why they weren’t singing during any 30-second breaks between chanting.

I’m all up for having a pop at opposing fans during a game but it didn’t feel like healthy banter. It felt more toxic than that. Almost arrogant. There was very little chanting in support of their own team and things didn’t help when I spotted a kid pointing at his United badge in front of Villa’s drumming fans, while someone in the opposite stand also stuck his middle finger up at them. All at 12-0 up and with no provocation. Why? 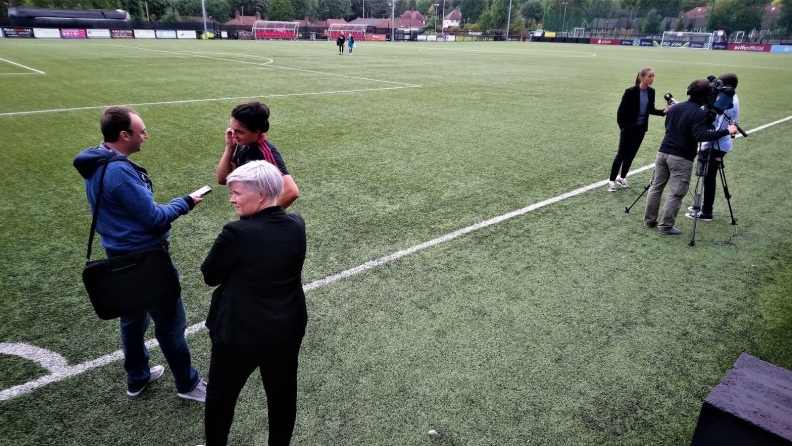 It wasn’t all bad though. There were a couple of Mancunians who I stood with at the start of the game that really got behind their team. They rallied around Sigsworth in particular, who they possibly knew. I enjoyed their elated reactions to her goals and also learnt a number of northern colloquialisms about football. It were a good knock from their side, that’s for sure.

This was my second women’s football league match, with the setting contrasting somewhat to my first experience down the road at Birmingham’s 30,000-capacity St. Andrew’s. I’d previously argued that women’s games should be at bigger stadiums like that all the time but I can understand the draw of tighter grounds like Midland Premier Division side Boldmere St. Michaels’.

The 3G pitch was off-putting (some of the bounces were ridiculous and actually helped United) but the Trevor Brown Memorial Ground – which is named after their former chairman – has a very decent set-up. And, from my experience, it’s a lot more accessible than Solihull Moors’ Damson Park, where Birmingham City Women play their home games. However, I still believe these elite-level female athletes deserve a stage equivalent to that standard.

Hopefully the league re-structuring will prove to be the catalyst for domestic women’s football to reach the same heights and interest as international fixtures – where attendance records are continuously being broken. I know a lot of people were angry with how certain clubs were shunned in the re-modelling process and I can understand how one would think it’s money taking over football again. But it feels like the right step to me. It must give a huge incentive to young girls knowing they can be paid to play football full-time.

The more clubs that are encouraged to become professional is surely a positive thing for aspiring females. Which is why Man United re-forming their women’s team is such a good move in my eyes. I don’t know why their full-time squad are in the predominantly semi-pro second tier though. Perhaps they feel like they should earn their WSL spot, which is fair enough. But it seems like they belong in the WSL already. The team that they’ve assembled would surely hold their own and maybe even challenge for the Champions League spots.

As for Aston Villa Ladies, I honestly don’t believe they’re a bad team. They looked good in spells but perhaps lacked a bit of experience with their squad averaging 21 years of age. There’s no way they’re going to be experiencing days like this every weekend. United were just a level above.

One Reply to “Women’s Championship: Scoring by the dozen”