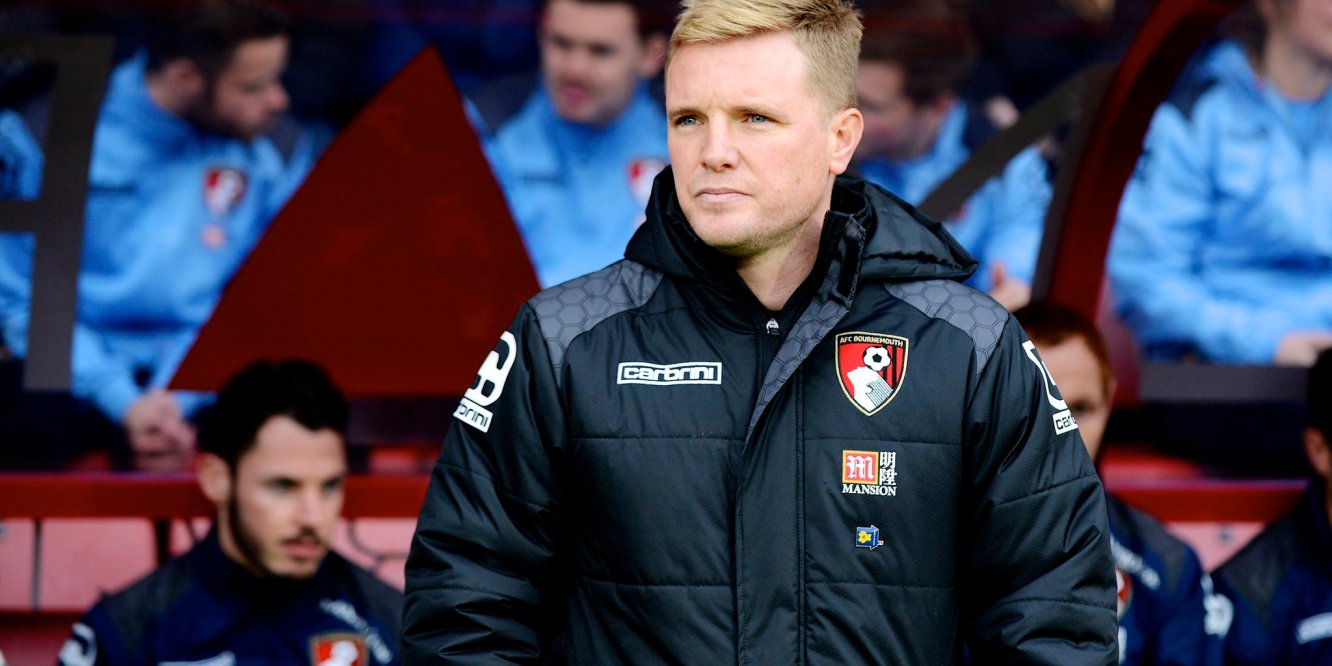 Eddie Howe looked into AFC Bournemouth’s eyes with a little sadness. His own playing career had come to a cruel and abrupt end, injury hampering his progress, so he was not ready to lose someone else to the cruel perils of football.

Bournemouth lay there, almost on borrowed time, a sense of uncertainty in the air. Howe could not let go; he could not just stand there and watch. He had to do something. “I’m not letting you give up on me that easily,” he said, clutching at Bournemouth’s right hand. “We’ll get you back on your feet, don’t you worry about that.”

It was January of 2009. Bournemouth had been forced into administration, with an accumulation of debt hovering around £4 million, starting the League Two season on -17 points. At the age of 31, Howe was the youngest manager in the Football League. He was Bournemouth through and through, having joined them at the age of 10, and it would have been heartbreaking to be the man who took the club to the Conference Division.

In their final home game of the season, to save their Football League existence, Bournemouth secured their survival by beating Grimsby Town 2-1 through a Steve Fletcher goal ten minutes from time. Sheer delirium and wild celebrations greeted the players as fans raced onto the pitch like a swarm of bees. It was the beginning of a brimming romance between Bournemouth and Howe, the sort of story that had you wondering how far this could last.

“Thank you, Eddie,” Bournemouth whispered, laying its head on Howe’s shoulder. “Without you, I don’t know where I’d be.”

They enjoyed a wonderful two-year period together, achieving promotion to League One in 2010 when many thought that stability would suffice. Nothing could stop them now. But, one night, something did not seem right. Howe seemed distant. “Is everything alright, Eddie?” There was no twinkle in his eyes, no endearing smile; just a plain face. “I don’t know how to tell you this,” he began, “but I have decided to join Burnley.”

This was not a bad dream, or a bad joke. This was true. Howe was unveiled as the new Burnley manager in January 2011, an unexpected end to a flourishing relationship. But, even with the promise of a Burnley team moulded in the image of Howe, something just did not feel real. It was not what Howe wanted. He sat in his office a year on, a picture of Bournemouth in his hands. A tear fell from his face. He had to go back.

They rekindled their spark after Howe left Burnley in 2011 amidst a feeling of emptiness. Bournemouth embraced Howe, scars still fresh but willing to give him another chance to prove his worth. Hard work, perseverance and most importantly, trust allowed Bournemouth to find themselves where they are today. “Pinch me,” Howe said, looking around the Vitality Stadium for their first game in the Premier League in 2015, “because this can’t be real.”

They lost the game 1-0 to Aston Villa, but that does not seem to matter anymore. It must still feel like a dream that many Bournemouth supporters would rather not wake up from.

The dismantling of Watford last weekend was their fifth win of the season so far. Their first goal, coming from a quick counter attack from deep within their own half, showed a level of attacking intent that embodies Howe’s philosophy to a tee: a fast breakaway, like a jet ripping through the baby blue sky, disturbing the peace and parting the clouds. Callum Wilson should have scored after a lung-busting run. David Brooks saved his blushes.

Bournemouth are now becoming an established Premier League side. Currently sitting in sixth place on the log, it is has been an extraordinary romantic drama filled with ebbs and flows, and the Howe-Bournemouth relationship now looks like a match made in heaven.

They have been well worth their lofty position so far, and under the guidance of a man who once said, “I wouldn’t want to be a manager if I changed what I believe in”, how ambitious are Bournemouth willing to be? After Burnley’s exploits last season in qualifying for the Europa League playoffs, it would not be beyond the realms of possibility to see Howe lead his team to a level of success that may not have been realistic a decade ago.

He leads the way for the new generation of English coaches trying to establish themselves in an environment that needs fresh ideas. Teams tend to look abroad for managerial quality, be it Spanish flair, Italian steel or German efficiency, when the solutions could be closer to home. It seems to be a risk to appoint someone from the pool of English coaches available, yet their philosophies may be as effective as the ones being brought in by their foreign counterparts.

When the likes of Pep Guardiola, Jose Mourinho and Jurgen Klopp decide to call it a night on their duties, where will the top teams look? With every appointment, success is not guaranteed. The idea that a manager needs trophies in his curriculum vitae to ensure progress is outdated thinking.

Looking over the town, on a warm spring night, Howe points out a shooting star. “Make a wish,” he pushes Bournemouth, a nervous smile evident as the star leaves a light trail. Could they not just stay in this moment forever?

Howe will not be getting carried away anytime soon, his sights firmly set on constantly improving. Time will tell if an elite club will be able to make the brave decision to appoint him, but for now, the honeymoon period on the south coast seems to be ongoing, and, in Bournemouth’s eyes, long may it continue.