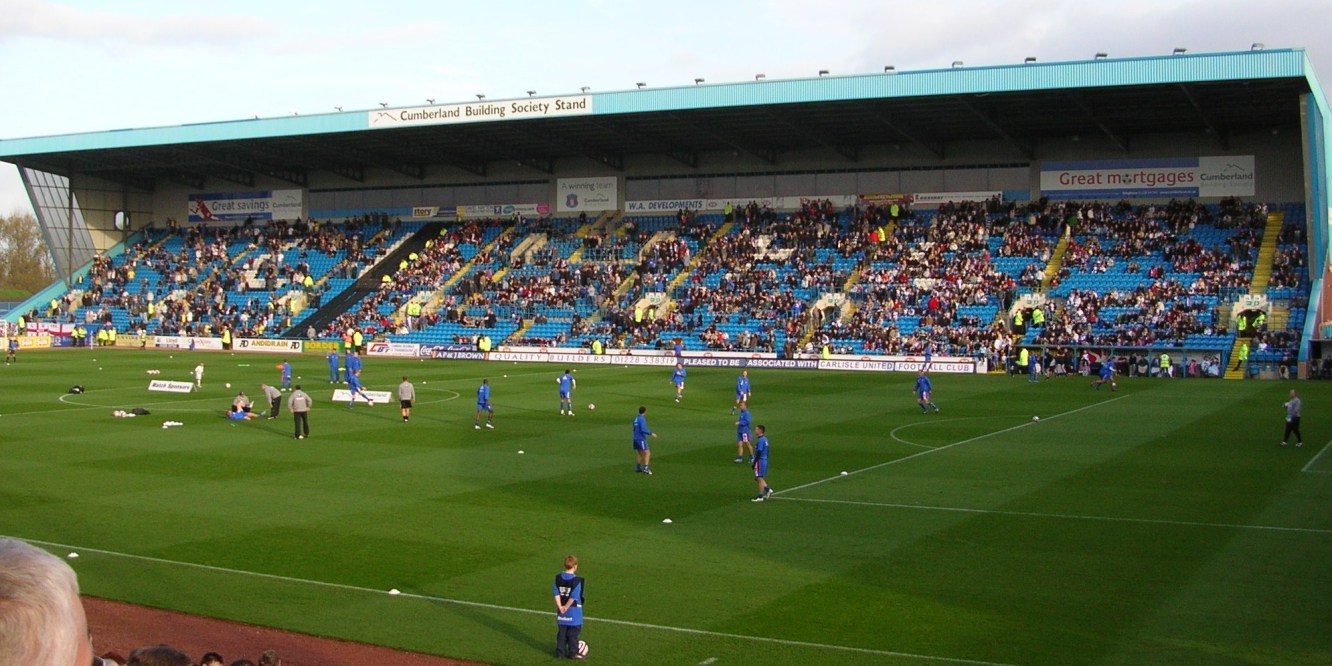 For many English football fans, Carlisle United’s Brunton Park is amongst the furthest domestic away game you could anticipate.

Simon Inglis in his book ‘The Football Grounds of Great Britain’ quotes Daily Mail football writer Brian James in ‘Journey to Wembley’ in a fitting assessment of Brunton Park:

‘A frontier post of football indeed, guarded only by sheep. Nothing moves out there. And the notion that a ball kicked over the wall would go bouncing until it dropped off the end of the world is hard to shake off.’

They are the last of Cumbria’s three football league clubs with Barrow still being in Lancashire when they failed a re-election to the league in 1972 and Workington Town giving way to Wimbledon in 1977.

The Brunton Park pitch is perilously close to the River Eden and Petteril, which are susceptible to flooding on an annual basis.

The ground is also renowned for the downward slope it possesses towards the River Eden. This recently threatened the staging of an FA Youth Cup game against Doncaster Rovers.

Nevertheless, the ground staff – given their vast experience in dealing with such weather – managed to pump the pitch clear of floodwater and mow it in the intervening twenty-four hours prior to the game.

Personally, Carlisle United’s Brunton Park is a real favourite of mine.

It holds a quirky charm, exacerbated only by the odd-looking additional wings to the main stand. These were hastily added in preparation for the club’s promotion to the old Division 1 in 1974.

If you’ve never had the pleasure of visiting the ground, think of how you added additional terracing to the Subbuteo stand system by raiding your Lego box.

Having first stood with the locals in 1988 to watch games in the then 4th Division, you can’t help but warm affectionately to their outlook on life, football and their beloved Carlisle United.

During that period, I regularly visited the city due to my girlfriend being in attendance at the Cumbria Art College. These weekend visits presented me with the perfect opportunity to attend the odd match at Brunton Park.

That season saw Carlisle United play Liverpool in an FA Cup 3rd Round tie during which I stood in the away section since I was a season ticket holder at Anfield. 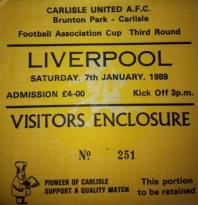 The following week however, saw a standing ticket for a home game with York City reduced from the usual £3 to £2 so that regular match goers weren’t out of pocket over both games. This further emphasised their close affiliation with the local community.

I’ve got to admit, I was mawkishly drawn to a few games last season as the Blues flirted seriously – nigh on conducted a full-blown affair – with relegation.

I chalked off Accrington Stanley’s Crown Ground in my ground-hopping diary for a fixture on Easter Monday, which saw black humour aplenty amongst a travelling mass in excess of 1,000 in a total crowd of 2,100.

The match ended in an abject 3-1 defeat.

The next fixture I made it to was a home tie with Plymouth Argyle that concluded in a 2-0 victory that saw Carlisle United stave off relegation.

Thankfully, there was no need for a late Jimmy Glass volley this time around.

A few weeks back, I spotted a free weekend for myself at the end of November. A quick check of the fixtures saw an entrance fee reduction to a £10 standing ticket for the Football League Two game against Crawley Town – if bought in advance. This would be under the covered Warwick Road End terrace.

With a 180-mile round-trip journey, diabolical weather saw me plump for the car as opposed to a Virgin Train from Preston.

This service has a nasty habit of falling prey to the Westmoreland wilds of Shap Fell – the highest point of the English railway network – with slow running or even cancelled trains aplenty.

Brunton Park is situated very close to Junction 43 of the M6 and having parked the car readily positioned for a swift post-match exit, I made the brisk half-mile walk to the ground.

Along the way, I consumed the obligatory burger – priced at £3.40 – and leaned on a barrier for the perfect vantage point.

No finer way to watch a match, may I add.

A great game ensued as Carlisle took the lead within the first two minutes following tidy wing play by a talented young player called Alex Gilliead. The Newcastle United loanee produced a fine cross for Charlie Wyke, whose header nestled in the back of the net.

Further wing-wizardry from Gilliead on 28mins saw a low cross reach Jason Kennedy, who flicked it into the path of the oncoming Wyke for his and Carlisle’s second.

Crawley Town – in their black Puma kit quite akin to the away strip of Fortuna Dusseldorf – clawed a goal back on 33mins as the game opened up in intermittently rainy conditions.

However, Carlisle put the game out of sight just three minutes into the second-half through their striker, Jabo Ibehre, who slotted into the top left hand corner of the net.

Numerous chances occurred for Carlisle beyond that, but neither team were able to add to the score line as the game finished at 3-1.

It turned out to be a productive week for the club as they pushed on from the 4-3 midweek victory at Luton Town. This sees the Cumbrian Fox sitting healthily in 6th place and looking upwards at possible promotion.

Highlight – For me, the heckling of referees at lower level games is brilliantly audible. Following a free-kick award to the visitors, the referee offered his whistle to the local who had vocalised his discontent with the decision.