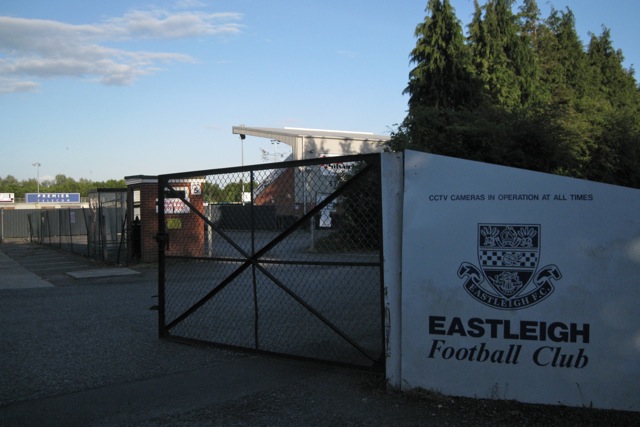 As far as groundhoppping goes, certain grounds are on the radar, but Eastleigh F.C’s Silverlake Stadium definitely wasn’t one of them. Nevertheless, Wrexham were due to play there and plans were made to make the long trek to deepest Hampshire.

I’ll be honest, I’d never really taken notice of where, or even who they were, until their excellent FA Cup run this season.

Eastleigh F.C. are riding high in the National Conference and they recently lost out to Bolton Wanderers in the FA Cup 3rd round after a replay.

Another passing interest is a distinct Welsh connection with former Swansea City and Newport County defender Chris Todd at the helm, former Welsh U21 captain Joe Partington [who’s mother hails from Flint] and the Nomad Kaid Mohamed who started this season at Port Talbot.

They were facing a Wrexham side who were enduring another poor run having lost to Braintree four days earlier on what many commented was a very poor pitch.

The Silverlake Stadium, otherwise known as Ten Acres, has a very impressive shallow all-seated stand behind one goal – where the away fans were situated. Running the length of the pitch was a relatively new terrace and this was also behind the other goal where the home fans congregated in an attempt to create an atmosphere.

Running along the other side of the pitch was a tall stand situated mainly in the centre, similar to Bristol Rovers’ Memorial ground. The boardroom and manager’s office was situated by the stand, whilst the executive lounge was in the corner – both housed in matching portakabins.

Upon discussions with some of the fans, I understand that they have plans to upgrade the stadium and garner ambitions to gain promotion to the Football League in the near future.

The match was in doubt until nearly kick off time; despite the presence of my mate Dermot Gallagher the ex Premier League referee. I’d previously met Dermot at a Barnet  – Wrexham match, and the young looking referee seemed hesitant to give the game the go-ahead.

Both managers wanted the game to start and Gary Mills, the Wrexham manager, insisted that the Braintree pitch from the previous game was in worse condition. The Eastleigh officials agreed and were adamant that the pitch was in a worst state when they played Bolton in the FA Cup.

The fresh faced official wanted more sand on the boggy areas so that the players could turn and not get injured. I agree that player safety is paramount; all present were surprised that he left it so late to give the green light for the match to go ahead.

The match itself was enlivened by Eastleigh’s Andy Drury who scored with a spectacular strike from outside the box. Wrexham then drew level through Sean Newton’s shot, also from long range.

Over the course of the game, the standard of play deteriorated just like the pitch did, but Wrexham blew a great late opportunity to claim three valuable points when captain Connor Jennings failed to convert a penalty.

Overall, the draw was a fair result.

I made the long drive back to North Wales in 4hours 20 minutes, with my usual pin badge purchased.

Upon reflection on the drive home, I realised that ticking Eastleigh F.C’s Silverlake Stadium off my groundhopping list was an unexpected, but delightful treat.