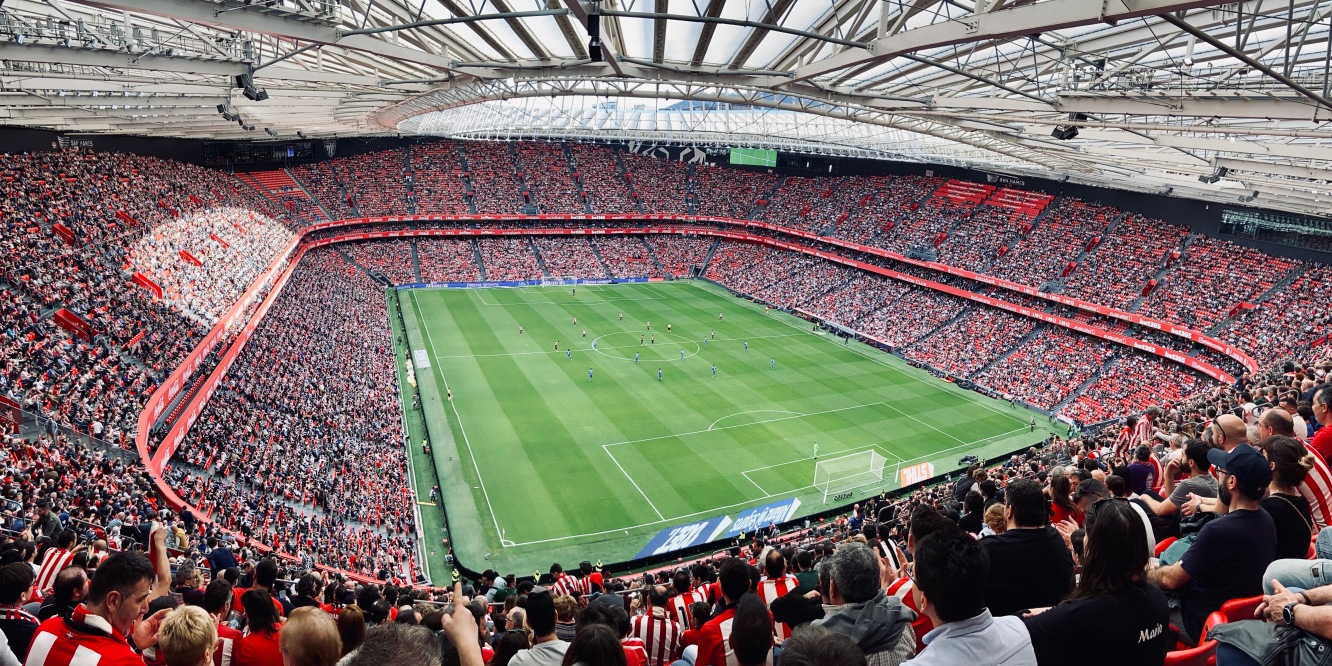 Me and my partner crossed the Nervión river before approaching the Guggenheim Museum. This stunning piece of modern architecture epitomises the structural essence of Bilbao; a stunning blend of both old and new, having opened in 1997 and helped turn a then struggling industrial town into a cultural metropolis. We carried on along the Nervíon, where we approached a maze of green spaces – providing both a relaxing setting and recreational outlet for locals within the concrete jungle of a city.

We chatted between each other as we looked back on our first three days of a five-night stay in the Basque Country. Our time there had seen us indulge pretty heavily in the local cuisine (mainly cerveza, vino tinto and pintxos), whilst the Friday night had seen us celebrate our engagement in a traditional Basque restaurant in the Casco Viejo (Old Town) district.

Yet on this particular day, and slightly different to our first two days in the city, there was a certain sense of anticipation in the air. Flags adorned balconies throughout each and every side street. It was match day in Bilbao as the red and white of Athletic Club was proudly on display in preparation for the visit of Getafe.

This was my second visit to the city. I first visited back in 2012, when Manchester United were completely outplayed over two legs against Marcelo Bielsa’s Athletic in a UEFA Europa League last-16 tie. The city and its inhabitants certainly left its mark on me back then, so much so that I always insisted on heading back there one day – especially with a new stadium to be ticked off.

The Old San Mamés that I visited back then, also known as La Catedral, has since been replaced by a rather futuristic modern-build version San Mamés. As impressive as it is, when we first approached the stadium on our second day, I couldn’t help but yearn for the romanticism of the old one. Nonetheless I was still satisfied to have been lucky enough to attend a match before its demolition in June 2013.

We reached the stadium’s surrounding streets a couple of hours before kick-off. Desperate for a beverage, we made a beeline to a bar called Bar Swansea. Now, this isn’t a British bar or nothing like that, it’s a traditional bar which serves a great choice of pintxos and alcohol. According to the bar manager, the name is thought to come from the original owner of the bar who came to adore Swansea following a holiday there.

Having finished our drinks and pintxos, we made our way from Bar Swansea towards the ground itself, where around ten different bars, accompanied by the odd souvenir shop, creates a passageway to the San Mamés. Again, we stopped along the way, ensuring that we weren’t missing out on any local delicacies.

We headed for our seats around 45 minutes before kick-off. Stopping for the obligatory photo outside of the stadium, we took in the view – a stadium resembling a spacecraft, with aluminium-looking spears pointing downwards towards the unknowing fans as they search for their turnstile.

It had none of the essence of the Old San Mamés, although in truth, how could this new-build ever come close to the soul and history of La Catedral?

Seated in the heavens, we had quite the view of the internal organs of the stadium, although if I’m being honest I opted for the cheapest tickets (€45) available to us from the ticket booth the day prior the match. Yet none of that seemed to bother us. It’s all about being part of the wider sense of the match; the camaraderie, singing and enjoyment.

There was to be very little of the latter. Getafe, despite conceding the majority of possession to Athletic (71%-29%), were much more potent in attack. They sat back, absorbed and nullified Athletic’s blunt forward line, before countering and displaying a killer instinct that has seen them rise to lofty heights in La Liga.

Getafe took the lead when Damian Suarez broke forward and sliced the Athletic back-line open like a hot knife through butter, before his well-placed shot beat Unai Simon in the Athletic goal. This was Damian Suarez’s first of the season and he was rightly overjoyed.

The goal did nothing to awaken a sleepy San Mamés crowd. The atmosphere had been pretty subdued from the off. We were relatively surprised at the low-key nature of the home fans, with the team’s woeful performance dampening it even further.

Athletic went in at half-time 1-0 down. Their manager, Gaizka Garitano, undoubtedly did his best to generate some sort of reaction. Nevertheless, just five minutes into the second half the game was pushed out of reach as a VAR awarded penalty saw Jaime Mata power one home to the bottom-right corner of Unai Simon’s goal.

Athletic did their utmost to garner a comeback with a triple substitution on the hour mark. Aritz Aduriz, the legendary and soon to be leaving striker, replaced his long-term replacement Asier Villalibre up-front, Ibai Gomez came on for Unai Lopez on the wing, whilst Ander Capa replaced Ivan Lekue at full-back. This, however, failed to kick-start a flailing Athletic.

Gaizka Garitano appeared flat on the touchline compared to Getafe’s Pepe Bordales. This wasn’t helped as VAR struck again by disallowing a goal for Athletic on 80mins. This was quickly followed by Ibai Gomez’s shot hitting the bar on 84mins, before Aritz Aduriz shot wide on 90mins.

A strong finish on the whole by Athletic, where one goal could easily have seen the match turn on its head. However, Getafe had more quality overall and rightly saw the match out to the dismay of the home fans.

The standard on show from both sides wasn’t the best, yet neither was the atmosphere. Perhaps I expected too much following my previous visit to the Old San Mamés. New grounds tend to take time to build that affinity with the home fans. As years go by, memories are created and unforgettable nights are experienced – none more so than Athletic’s subsequent home match resulting in a 1-0 Copa del Rey quarter final victory against Barcelona.

Athletic have since guaranteed their place in the final where they will face arch rivals Real Sociedad in Sevilla. This will be their fourth cup final in 11 years, quite the feat as they continue to follow their La Cantera policy of only fielding Basque heritage players. I’ll once again be keeping a close eye on their final, quietly cheering on this special side.